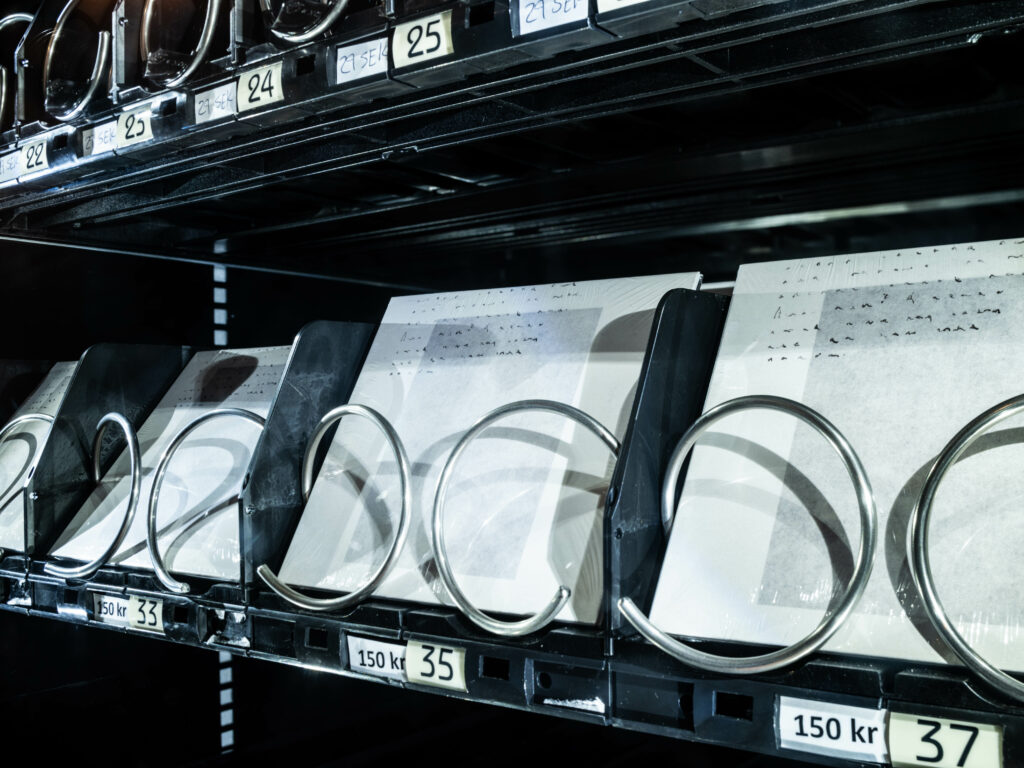 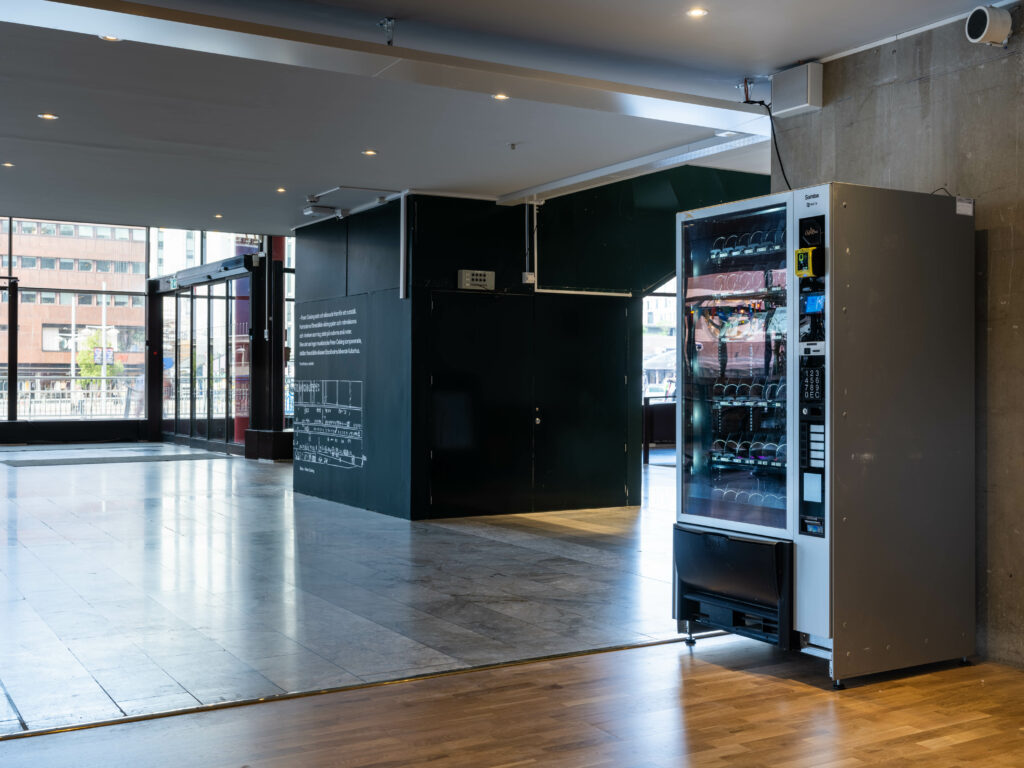 Vending Machine is an album by Joakim Forsgren and Andreas Hiroui Larsson – a dialogue between the two and their different practices. On the album they have worked with audio recordings of malfunctioning billboards and vending machines, as well as of percussive sounds from a sound card case, and a tennis racket. BBC Radio 3 recently highlighted the album in a thematic episode based on the collaboration, and with an appropriate name: The Song of the Vending Machine.

Vending Machine is published by Thanatosis on 11 June, and is available in a vending machine at Kulturhuset Stadsteatern until 11 August.

Vending Machine is part of An Infinite Love, an exhibition project in three parts presented by Per Hüttner, Barbara Polla, and Joakim Forsgren, made in collaboration with SKF/Konstnärshuset, Kulturhuset Stadsteatern, Kl.9, and visionforum(dot)eu. An Infinite Love is made with support from the Swedish Arts Council. The vending machine at Kulturhuset Stadsteatern is installed on site with the support of Café Bar. Photographs by Jean-Baptiste Béranger.

Joakim Forsgren and Andreas Hiroui Larsson come from diametrically different perspectives on music. Hiroui Larsson has a background in acoustic jazz and non-idiomatic improvisation, while Forsgren has played electric bass in punk and rock groups since his early teenage years. The two being friends since several years, making music gradually became a way of spending more time together. Their way of collaborating began after several years of talking about doing so and sharing and discussing music such as Jah Wobble and the Nippon Dub Ensemble’s Japanese Dub and Miles Davis’ Dark Magus.

Hiroui Larsson says: ‘One day, while hanging out at Joakim’s studio, Joakim said to me, you are an educated musician and if my parents can make some music with this equipment you should be able to do so too.’ Forsgren and Hiroui Larsson set up an ambivalent atmosphere on the Rhodes, reminiscent of Davis’ In a Silent Way, had the drum machine play a tweaked clave, used a box with nails in it as a shaker, a sound card case as a cowbell and a folding ruler to play the tamborim rhythm. ‘It was all basically determined by what the view was outside the studio window that particular day’, says Hiroui Larsson. The track was sent to Brooklyn–based wind player and outsider–pop label owner David Lackner of Galtta Tapes, who added some strange and mildly phunky saxophones to the mix.

A year and a half of sessions later, Forsgren and Hiroui Larsson’s working method had developed into a seamless eight–limbed musical discussion. Hiroui Larsson recalls: ‘Sometimes, Joakim had already set up a groove when I would come to the studio, and then I usually had some opinions on determination of rhythmic frameworks, which would provoke Joakim to have me demonstrate what I was agitating. I would then find myself immersed in the digital and semi–autonomous mechanic landscapes that Joakim favoured, and being intensely focused on bringing my point across from within the sounds produced in front of me.’ Forsgren says: ‘I was interested in what the machines wanted to play, if they were asked. Not so much what we necessarily wanted to hear from them.’

A significant event occurred in the early spring of 2019. Forsgren assisted Hiroui Larsson with photographically documenting artworks of his that had been commissioned by and installed at a hospital in Stockholm. However, as they walked through the corridors of the hospital towards where the works were situated, a shift in their attention was called for. Hiroui Larsson: ‘I remember that dusk had begun, and there was a little niche with a window through which one could see how the sky had turned red. In this niche was a vending machine. It was empty, atmospherically lit up, and emanated an electrical hum. Both Joakim and I were drawn to this singing vending machine. We were captivated by the fact that it sold us nothing and at the same time performed for us, and both of us walked around it as if in a trance. I recorded the sound and it became the foundation for the track vending machine. A half year later, during late summer of 2019, Joakim and I decided that Vending Machine would also be the name of our collaboration.’

Complementing each other in the sense that Forsgren designed and framed the environment that Hiroui Larsson posed questions within, their resulting music draws on ambient, industrial, synth, techno as well as the intertextuality of Arto Lindsay’s Mundo Civilizadoand the dark humor literature of artists Leif Elggren and Thomas Liljenberg.